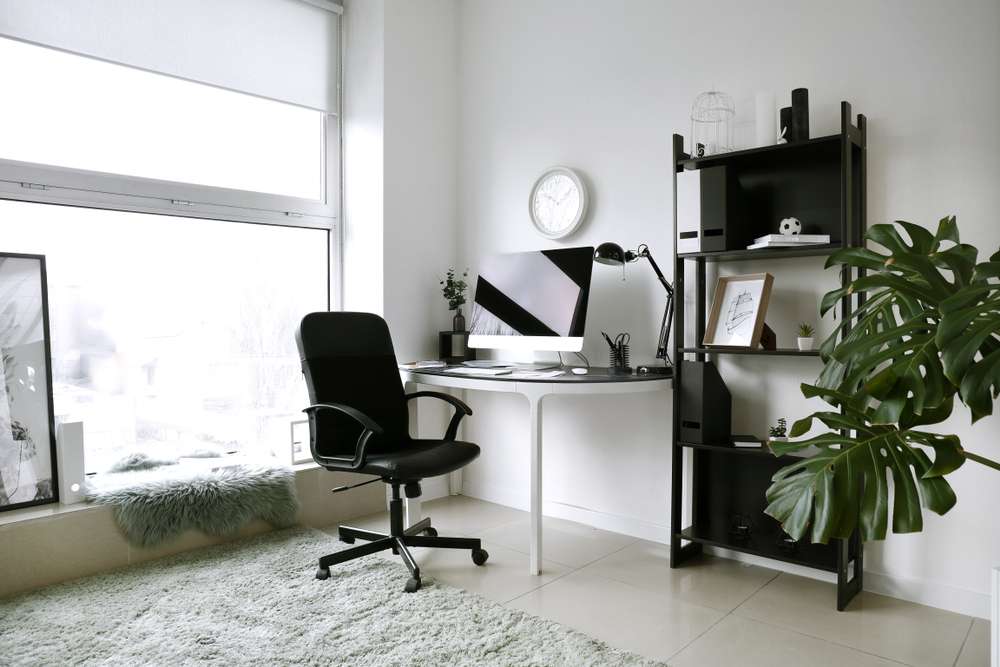 Computers have become an integral part of our existence, and everything we do is computer or technology based. Amusingly, computer rooms have been called the “control panel” of the entire house. People often use them to equip their homes with smart devices. Whether you use your computer room as part of a home office, in a bedroom, or as a gaming area, it is still a vital space.

Generally, it is recommended to keep all screens outside of the bedroom. This is due to the blue light they emit, which can mess with your sleep pattern. Bright screens simulate daylight, which may keep you up longer than you had originally intended. The difficulty lies when you are unable to fall asleep and the effect that has on your body.

However, many screens either come equipped with blue light filters, which automatically adjust themselves according to the time of day, or they have one that can be downloaded. These save both your eyes and your health from deterioration. Blue light filters are highly recommended if your bedroom doubles as a computer room.

It is advisable to keep the two areas separate, especially if you are doing work. If you associate the bedroom with work, then you may spend more time in work mode than receiving rest. People tend to be unable to disassociate between the two in combined rooms.

For this design, put a simple l-shaped white desk up against the narrowest wall in the room. You’ll want it by a window to have natural light filtering in. This design won’t have any shelving, but it will give you quite a bit of storage underneath and it will easily contain a desktop unit.

This design can be useful for someone who requires multiple monitors or for two individuals who require the same space.

As part of the design, place the bed further down in the room against a purplish-grey accent wall. Clean, modern nightstands should also flank the low-lying bed and have soft lighting. This will keep the two areas separate from each other while allowing for a nice flow in between the spaces.

You can also implement a configuration with large windows aligning the longest part of the room, which would be a bit different than most. Most setups have the desk along one side of a wall, but we recommend having the desk facing outward into the space, with your back toward a wall.

The desk for this design is ideally an l-shaped light oak desk. This desk will give you great storage underneath. You’ll also want a wide shelf in front of the desk to hold plants or to just personalize the area. A black ergonomic chair completes the look.

The floors should be a medium grey tongue and groove-laminate flooring, while the walls should be white to create more of an openness to the room itself. Also make sure to have a black ceiling light hanging overhead for a bit of illumination, as well as slat blinds for the windows.

If your computer room is more for gaming, then you can choose a more modern, sleek feel to your furniture. The best part about these types of rooms is that you can be as creative as you want.

For this design, you can take an ordinary room with thick, white, medium-piled carpeting and dark venetian blinds and added lights. On one wall, add some hexagonal lights with an S-shaped pattern. On the adjacent wall, install a gaming sign just over the computer area.

Lights are recommended for along the side of the desk as part of this design. Additionally, you can also include a computer system that lights up.

To complete the look, add an ultra-wide gaming screen in front with a vertical screen along with a white and black gaming chair.

For a futuristic look, you can use a white, l-shaped desk with a black desktop with three monitors – one mounted on a wall underneath a shelf, one hung vertically in the corner, and a third, larger monitor placed on the adjacent wall.

To add to the look, you can have the tower of your gaming system translucent with white lights inside, black borders, and small speakers on either side of the keyboard.

Also, for this idea, be sure to include a 3-D backsplash to the area and have it backlit with a soft white light. To take this design even further, you could include a Star Wars theme and add light sabers to the wall, Star Wars lights/3-D lights, etc.

For example, one gaming office space removed the seating under an angled window ledge and installed a desk. They built it out into a narrower l-shape on the adjacent wall. On top of the desk was their system, while underneath there were built-in hooks for headphones, room for speakers, and a room for a glass mini fridge for snacks.

Hexagonal lighting ran up the adjacent wall and ended in a pattern in the middle of the ceiling. The ceiling also had recessed pot lights for additional illumination.

The flooring was oak laminate, and the walls were a light grey. The blinds filtered light and were a smoky grey.

This gaming office space was very clean, modern, yet creative, as well as an interesting use of space.

For computer gaming rooms, users don’t always have to do multiple sizes of screens. One person designed a room with a drop-down projector. Two gaming screens were underneath and stored on a shelf with a console underneath.

In this design, the desk also appeared to be modified. It was a regular white desk with storage. However, lights were added to the top, and another board/piece was added to the top resting on the lights. It created an illuminated floating feel to the desk.

There were patterned lights on one wall with two guitars mounted on their side. The light grey laminated flooring had a thick smokey grey area rug sitting on top. A futon flanked one side of the room, which doubled as seating area or for rest.

One of the most creative designs I’d ever seen included one wall painted beige with the other a teal in a chalk paint. Beige curtains with a black running through framed the vertical window and touched the floor.

The floor was in a beige square pattern with black borders. The desk had a glass top, and a black shelving was tucked underneath, which served to make it appear to be a cohesive l-shape desk but added extra storage.

A simple, short chair is right by the desk with a white and teal lamp pulling in all the colors in the corner.

The most creative aspect was the large clock on the beige wall. For where each number should be, there were pictures, and the hands were hung in the middle. Users can get very creative with the pictures. If you are into Marvel comics, you can mount them in a frame. You can frame your family, or anything you want.

In the center of the clock, there was a stenciled saying as well. It is easy to take the premise from this room and extrapolate it to fit a theme or to reflect more of a personal style.

Sometimes an office space can be totally changed by the furniture. For a modern room, you can choose an angled desk. You can also add an angled bookshelf right beside it. The design will be small, but it’ll hold a great deal of storage.

There are so many designs that you can create for a computer room. Many designs can be customized to suit your personal tastes and preference.

You can also choose to update your existing space. Adding neon lights along a bookshelf, desk, or any straight edge can add to that gamer feel. You can also incorporate neon gaming signs into the space to give it more of a tech gamer feel.

If gaming isn’t your thing, you can take it to a clean, modern feel.

No matter what space that you have available, whether it is a single room or a shared space, you can use a decor that will express your own tastes. Desks are no longer big and bulky. Many of them are quite compact and sleek. If you use your available space well, it is amazing what you can create that combines personality with function.