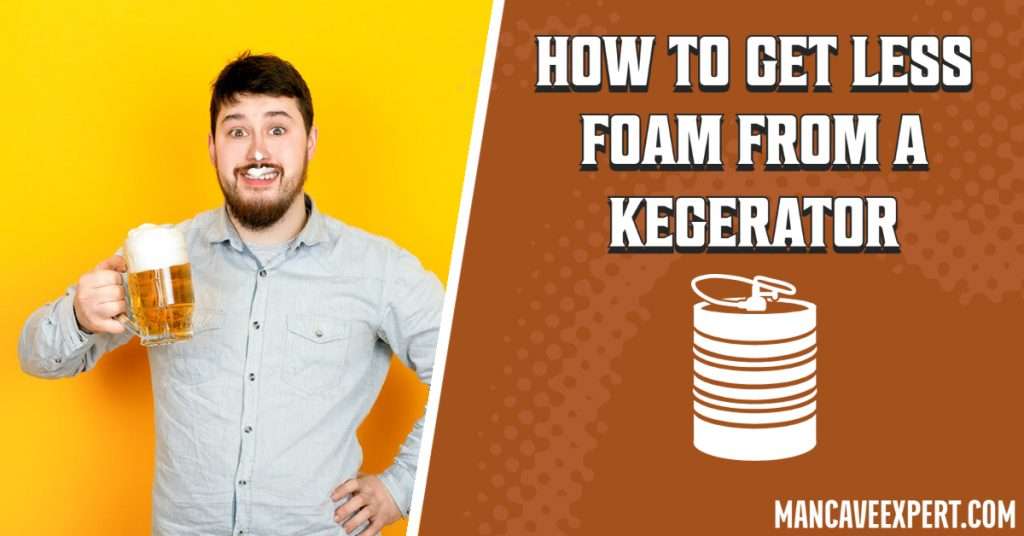 How to Get Less Foam From a Kegerator

Have you ever gone to pour yourself a beer from your kegerator, only to get a cup full of foam?

It might seem too complicated to figure out (particularly if you’re already a little buzzed), but it’s a simple fix. We’ll provide an in-depth explanation of how to get less foam from a kegerator, so you can keep your party guests happy.

Looking for the best kegerator? We reviewed the top kegerators for your man cave.

Why does a Kegerator Produce Foamy Beer? 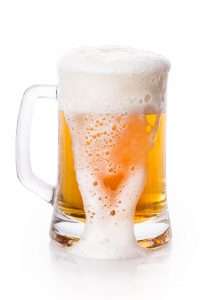 The answer to this question involves basic science, as well as the reason people even use kegerators.

Kegerators push beer upward, so immense pressure is applied to push that liquid against gravity, creating a smooth but comfortably carbonated drink. That pressure comes in the form of carbon dioxide, and when the beer comes out, it contains dissolved C02.

Usually, the C02 dissolved into beer is roughly 12 to 30 pounds per square inch (psi), and the atmospheric pressure of C02 is approximately 0.006 psi. The result is quite a bit of C02 trying to get out — that creates a lot of bubbles.

It doesn’t stop with the bubbles, though. The bubbles attract hydrophobic compounds, which form a protective layer around the top of your beer. That’s what causes the foamy head you’re probably familiar with. 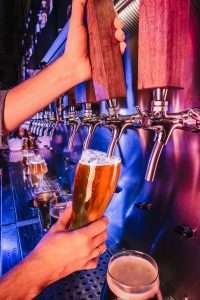 Believe it or not, the glass you use to drink beer from, and even the way you pour it, can affect how many bubbles there are in your beer. Using a dirty glass can also lead to more foam.

As you’ll read below, you don’t want to pour beer when it’s warm. Let your beer cool in the kegerator before you pour. Such a process could take a few days (72 hours), but it’s worth waiting for a cool atmosphere to pour from properly.

However, that does not mean that you can make up for warm beer by pouring it into a freezing glass. Pouring beer into a glass that’s been in a freezer or other cold environment will only create more bubbles.

You must also use a glass catered specifically to beer. That means no foam cups or glasses with a soap film on the inside. Glasses with smooth, clean interiors work best. Touching the faucet or anything to that surface might affect the pour, so keep the glass clean.

Similar to pouring any alcoholic beverage, there is an art form to pouring beer. You must tilt the beer glass as you pour and then straighten it when the glass is two-thirds full. Tilt the faucet up in a quick, easy motion. Don’t pour from a partially opened faucet; it must be open all the way. Also, keep the glass away from the faucet. Doing so will keep the glass clean and the beer less foamy

Should You Turn Down the C02 Regulator?

When your beer flows with too much beer, your first thought might be to turn down the kegerator’s C02 regulator. You might assume that you’re pumping too much gas, or fizz, into the beer, so you might turn it down a notch.

Something to note is that fizz naturally happens because of yeast producing fermentation in beer. Therefore, you’re probably always going to have some fizz in your beer. Plus, C02 regulators are less likely of a problem than temperature or beer lines.

Luckily, C02 regulators are easy to set up, and they work well for a long time. However, you might have dropped or impacted it recently, which might cause it to malfunction. You can perform a soapy water spray test on your C02 to test its functionality and whether you need to fix it.

What Temperature Should a Kegerator Be Set At?

A rule of thumb with kegerators is to always keep them cool. Some people keep them around 38 or 40 degrees Fahrenheit since cold fluids hold more C02 than warm ones. Now, this is the beer’s temperature outside the keg and not the external temp of the kegerator.

Keep in mind that the C02 in beer is extremely sensitive to warm temperatures. Gas expands in heat, so you’ll have to deal with more C02 gas than if the beer were in a cooler environment.

Check your beer’s liquid temperature by placing a glass of water in the kegerator and measure using a liquid thermometer. Put the glass on top of the keg and leave it there overnight. Once the glass has cooled, check the temperature. Now, pour some beer into the glass and check the temp. If it’s below 40 degrees, it’s cold enough to serve.

Also, remember to keep the kegerator’s exposed lines away from heat. If they’re too warm, the first part of the pour may be foamy. It’s probably the most basic rule of properly pouring beer: making sure that everything is cool and not exposed to too much heat.

What Pressure Should a Kegerator Be At?

Another rule of thumb for kegerator pressure is to keep it at 12 to 14 psi. It sometimes happens where people set their systems to 100% C02 but only set the pressure to around 7 to 8 psi. The key is to infuse enough C02 pressure into the beer to have a few bubbles, but not an altogether flat beer.

While these are some close guesstimates, it might take trial and error to see which C02 pressure works best for your kegerator. To maintain pressure, don’t move your keg before you use it. Agitating the kegerator can cause faster C02 diffusion, and therefore more foam.

If you’re having foamy beer issues, you might try bringing the pressure down to 5 to 6 psi and see how a few beers look. If they pour without too much foam, you can work your way slowly back to 12 to 14 psi, raising the pressure one notch with each pour until you’re satisfied.

Usually, you can count on temperature problems causing foam in your beer. However, you might also need to tweak the pressure after changing a keg, just to be sure.

How Can I Maintain My Kegerator’s Lines?

Properly maintaining your kegerator’s lines is another considerable aspect of a well-poured beer. If too much air enters the line, it allows the C02 to escape from the beer much faster and creates even more foam.

You might also notice holes in the beer line, which allow air to enter into the pouring stream. In most cases, though, you probably have an incorrectly seated keg coupler, which is either not screwed in tightly enough or is not the right size for your kegerator.

Every 2 to 3 weeks, remove your lines and clean them thoroughly. If they’re getting a little old, go ahead and replace them, especially since beer lines tend to be cheap. We recommend using 3/16″ lines since their pour rate is usually reliable.

How do I Know My Lines are Set Up Properly?

The ideal beer line length is 5 to 8 feet. Anything too short or too long can cause foam problems. A 3/16″ diameter is ideal, but other sizes more or less the same size are okay also. Setting up the beer line above the keg reduces how much air might get into the line.

Make sure your keg coupler is the right size and is screwed on tightly. Doing so allows little to no air to get inside.

What if the Beer Lines and Regulators Work, but Not the Kegerator?

If you clean or replace the beer lines, you’ve given the beer sufficient time to cool down, and nothing is working, then you might need to look at the kegerator itself. Is it getting too old? Has the keg sat inside the kegerator for just a little longer than usual? Eventually, a new kegerator may be necessary.

Like we stated, knowing how to get less foam from a kegerator is easy if you take care of your kegerator and keep the beer cool. Sometimes you might need to replace beer lines or check the C02 regulator, but usually, you can count on warm temperatures causing foam to form on your beer.

Just have patience and let the beer cool in the kegerator before serving. Make sure you pour the beer right too! Presentation is key!