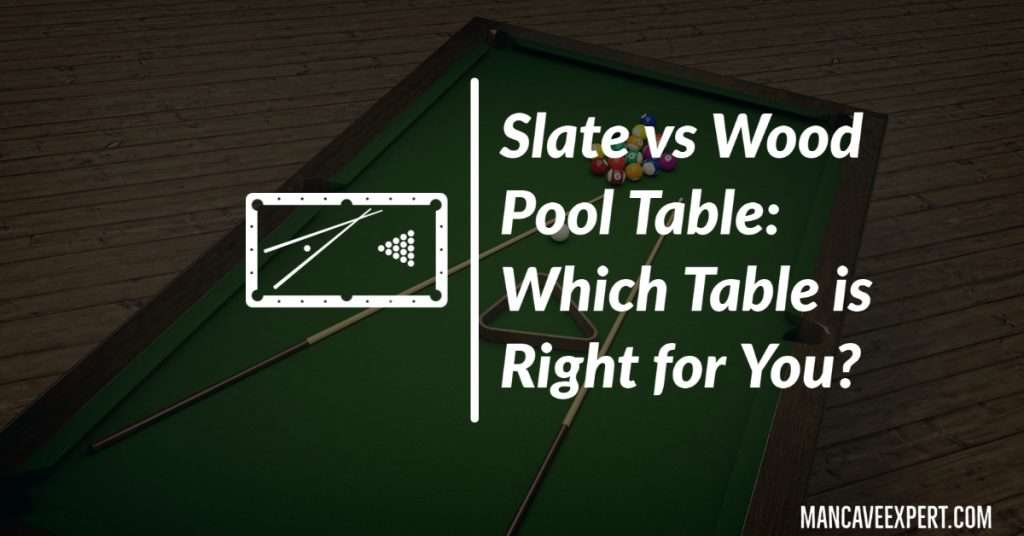 Slate vs Wood Pool Table: Which Table is Right for You?

What man cave is complete without a pool table? Selecting the best table to round out your room can be quite a challenge. Of all the options you have to choose from, the pool bed material is the most important decision to make. The pool bed (slate vs wood) impacts everything from cost to how the table plays.

It’s a battle – slate vs wood pool table – and you are the judge and jury in this high stakes battle for a slot in your man cave!

What to Know About Pool Table Design 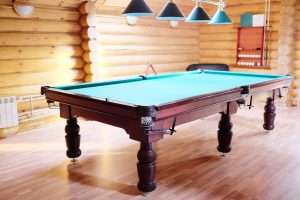 Most billiards tables involve multiple materials, including various wood varieties, to create the frame, braces, and general aesthetic appeal. However, the part you play on, the felt-covered bed, is usually wood or slate.

Traditional pool tables use natural slate sheets because they are dense and stabilize the table during gameplay. Further, it’s easier to grind and polish stone to achieve a surprisingly flat surface.

Generally, a billiards table made with slate is one large slab or three separate panels cut from the same slab and pre-drilled to connect perfectly. Each panel is ¾” thick or one-inch thick and can weigh up to 200 pounds. Though you can get a full slab slate bed, you can imagine why manufacturers prefer to divide it into thirds instead!

Modern pool designers created a lighter alternative using medium-density-fiberboard, commonly known as MDF. It’s a blend of hardwood and softwood fibers connected by a resin, making it quick and easy to manufacture several beds at a set size. Consequently, making pool tables with MDF is cost-effective.

Knowing something about how manufacturers make tables and the different materials helps create some comparison points to better judge which is right for you. Now the true contest begins as we put the two contenders through five tests to see which performs better.

You can probably guess that wood billiards tables cost substantially less to make than slate. MDF is widely used and easy to manufacture. Plus, you can mass-produce pool beds of the proper size.

Slate is a stone that must be mined, ground to a flat surface, and cut to the correct size. Plus, it’s exceptionally heavy, making shipping an additional challenge. Slate can be up to twice as expensive as a wood table.

Have you ever played on a table that seemed wavy? It was likely a wood bed that absorbed too much moisture and warped. A downside of using MDF is that it doesn’t hold up well if you spill something on it or live in a humid area. Over time the fiberboard absorbs moisture from the air and can warp or bend. Of course, it takes several years, but eventually, it bends.

Since slate is stone, it’s relatively resistant to moisture in the air and even spills (though the felt may not like it much). Slate typically remains solid and straight as an arrow for the life of the table and beyond.

Suppose you plan to pass your table on to the next generation, longevity matters. Wood tables generally don’t last as long for several reasons, including the moisture issues noted above. However, they don’t cost quite as much either, so it’s not the same as investing in an heirloom.

Slate tables usually stand the test of time; though you may need to make some updates here and there, the bed should sustain anything you throw at it. Take those fancy “jump shots” because they won’t damage the slate. However, too many of those bounces on a wood table can leave divots that impact gameplay.

Additionally, slate tables tend to feature sturdier frames because the panels weigh so much. It’s easier to go lighter on the wood bed because they don’t need the support. 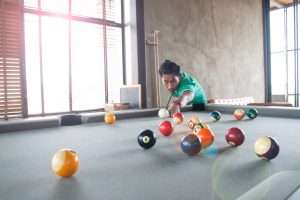 What do you usually play on? If you only know wood tables, you may not care, but slate table users may notice a difference. Wood tables tend to play slower than slate. Balls roll smoother, and shots seem cleaner on slate tables. However, for recreational fun and some manly bonding, it’s not always necessary to have a tournament-grade setup.

No matter what type of table you choose, moving a pool table is no joke, even if it’s just a few feet in one direction. There’s a good chance that moving your table could require some disassembly, especially if it’s exceptionally large. That said, it’s a good idea to plan your placement and how you can maneuver the pieces into your room.

Wood tables usually weigh significantly less. They are easier to take apart, move, and reassemble elsewhere. Slate tables take a lot more work and usually require professionals to transport, install, or disassemble. If you have plans to move at any point, slate tables may not be the best option. Check out our article regarding how much pool tables typically weigh here.

Are you still undecided? Maybe you just have a few questions that will clear things right up and make your decision easier. Let’s see if we can’t help you with that!

If you’re leaning toward a slate table, you need to decide whether to go with a solid slab for the three-panel design. There are two primary reasons to choose a single slab design. First, if you foresee moving the table around your man cave, then a single slab is the better bet. Also, the solid slab is naturally even, so there’s less leveling involved.

However, the three-piece slate came from a single slab, so you know they line up perfectly. Plus, the tri-panel slate tends to be at least 25% thicker than the single slab, which improves gameplay. Unless your room is completely level, the three-piece bed makes it easy to level because you can adjust each piece to perfection.

Of note, most slate tables come in ¾” or one-inch thicknesses. The one-inch slate may be heavier but gives you better bounce and roll.

Some manufacturers muddied the waters with hybrid-style pool beds in an attempt to blend the best of all worlds. A slate billiards table bed is a piece of solid rock from a quarry, but you may see some alternative descriptions on some tables.

“Wood slate” is another term you may stumble across, but it’s another misnomer. The term refers to a mixture of woods, usually MDF, plywood, or particleboard. Sadly, there’s not an ounce of slate involved.

Thankfully, there are a few alternatives available in case you’re not sold on either option. Technology provided composite materials, like slatron and honeycomb, that blends some of the best elements of slate and wood.

Honeycomb is a unique material stuck between plastic sheeting. It’s cheaper than slate but susceptible to warping and wearing down. Some manufacturers use a combination of honeycomb and MDF to reduce warping.

Slatron or Permaslate is another alternative that’s lightweight and durable. Combining particleboard and plastic sheets creates a slate-like surface that handles the force of fancy shots and tough gameplay. However, slatron doesn’t match slate’s longevity, and water can cause significant damage.

How to Tell if a Pool Table is Slate 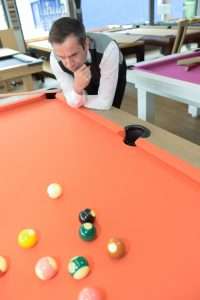 Disassembling a table or watching the installation are the surest ways to know if a table is slate or not. Naturally, that’s not always an option, but you don’t want to mistakenly spend slate-table money on one of the alternatives.

You probably can’t tell if a billiards table is slate just by looking at it. However, you do have two other options if you want to do a quick check.

First, try to pick up one end. If it doesn’t budge then, it’s probably slate. On the other hand, even a slight movement means it’s probably too light to be slate.

The other option is taking a look under the hood. No, you don’t have to peel up the felt; you can simply peek underneath and run your fingers across the bed. Slate tables should look and feel like stone.

Pro players only play on slate billiards tables for a reason – you cannot get a more precisely leveled table. That means your shots roll straight every time. Plus, the tables stand the test of time and can take a significant beating, making all of those incredible trick shots possible.

However, if you don’t mind some stray shots, the alternative tables aren’t bad options for the hobbyist. There’s nothing wrong with picking up a wood table for the occasional game and blowing off steam.

That said, if the price is your deterrent, you could try picking up a used slate table. Just make sure it’s slate before you make the deal.

The answer to the slate vs wood pool table debate is yours to decide. Only you can choose how to complete your man cave.