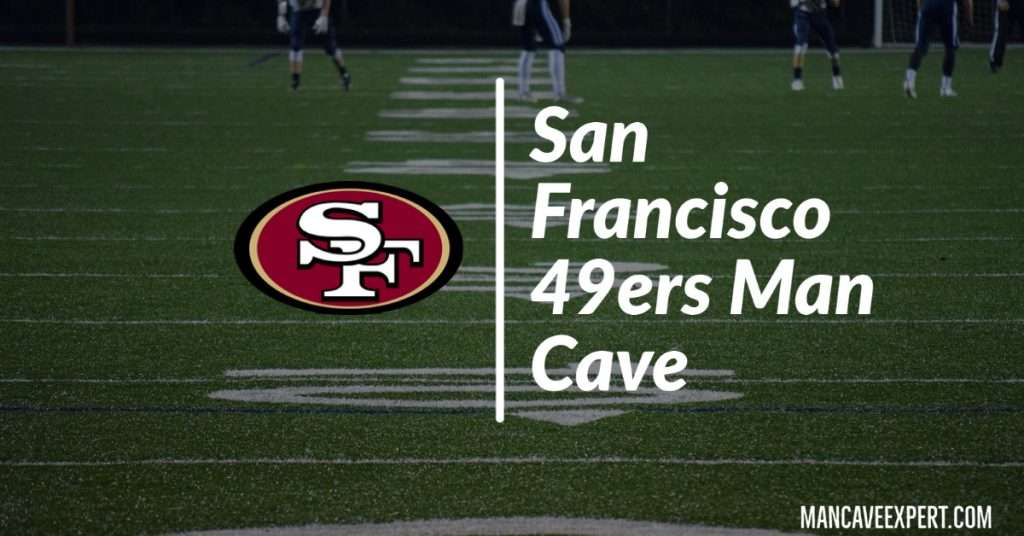 From celebrating the 49ers FIVE Super Bowl Championships to honoring the best to wear red and gold, we found the 10 items every fan needs for their San Francisco 49ers man cave. 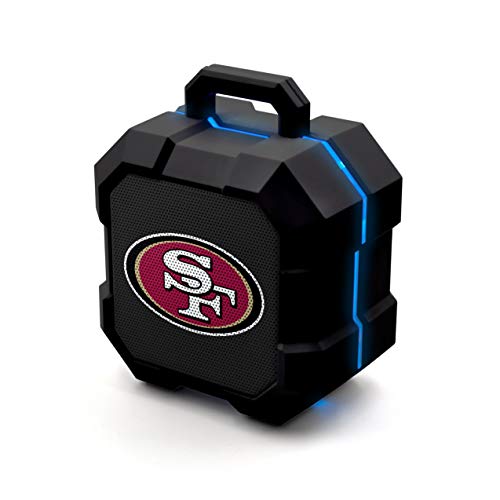 This Bluetooth speaker features the 49ers logo and uses Bluetooth 5.0 technology to connect to other Bluetooth-enabled devices. You can listen to your favorite music or your favorite sports podcasts for up to five hours with just one single charge and it has a 30-foot wireless range. It is the perfect speaker for any 49ers fan! 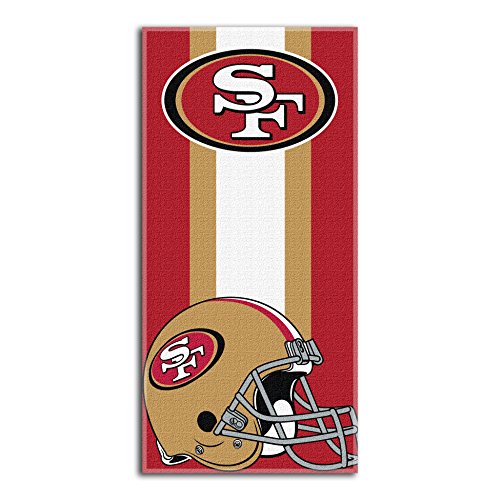 Every man cave should have a towel on hand, either to use or to be put on display. This lightweight towel measures 30” x 60” and features the 49ers’ logo and colors. Making it the perfect towel for your red and gold man cave. 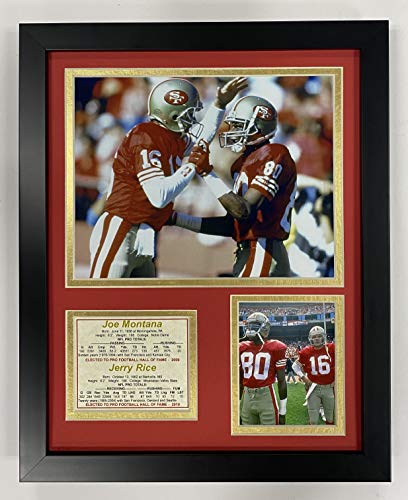 Celebrate legendary players Joe Montana and Jerry Rice with this framed collage. Featuring photos of the duo along with a bio, the collector’s item measures 11” x 14”. Montana was the team’s quarterback from 1979 to 1992 when he was drafted in the third round in the 1979 draft. Montana became a 4x Super Bowl Champion, 3x Super Bowl MVP, 2x NFL MVP, NFL Offensive Player of the Year recipient, and NFL Comeback Player of the Year recipient all while suiting up for San Francisco. Jerry Rice was the 49er’s first-round pick in 1985 and played for the team until 2000. The wide receiver is a 3x Super Bowl Champion, a Super Bowl MVP, and 2x NFL Offensive Play of the Year. 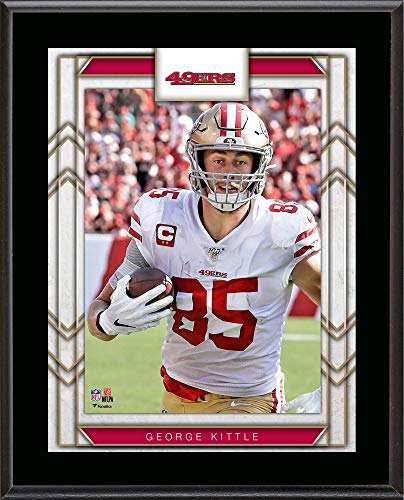 Your 49ers man cave is not complete without the team’s animated tight end, George Kittle. The collectible measures 8” x 10” and features a photo of Kittle, who was the team’s fifth-round pick in 2017 and helped lead them to win the NFC Championship in 2020. 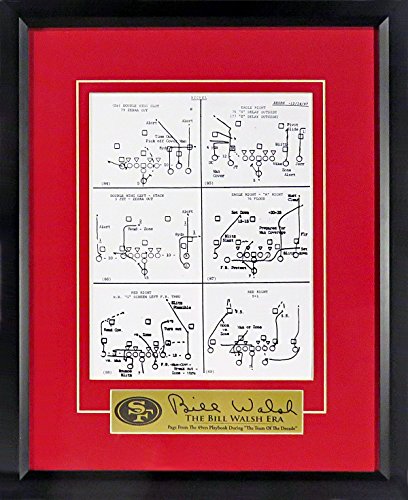 This is a really unique collectible featuring authentic pages from the San Francisco 49er’s playbook. Measuring 18” x 14.75”, this piece of history is signed by Bill Walsh. Walsh was the team’s head coach during “The Team of the Decade” era and coached the team to three Super Bowl victories while also being named NFL Coach of the Year in 1981 and 1984. 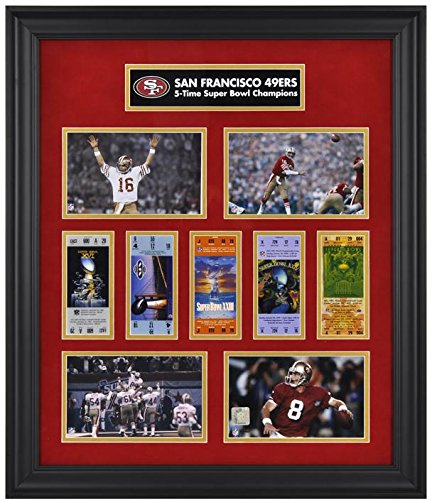 Commemorate the 49er’s five Super Bowl Championships with this collector’s item. The collage measures 18” x 24” and features replica tickets from all five winning Super Bowls and actual photos from the games. 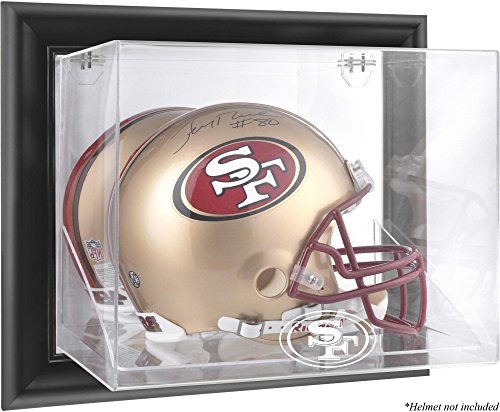 Have a signed San Francisco 49ers helmet? You want to protect it while also displaying it in your man cave. This mountable helmet display case features the 49er’s logo and is made of thick acrylic. Measuring 17″ x 8 3/4″ x 12 3/4″, the case also comes with a clear removable lid and a mirrored back.

Learn how to display football helmets in your man cave. 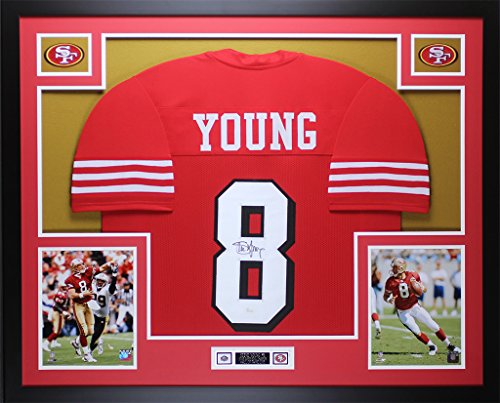 Celebrate legendary quarterback Steve Young with this framed autographed jersey. Measuring 43” x 35”, the jersey is framed in solid wood and features a photo of Young, whose jersey #8 is retired by the 49ers. Young was with the team from 1987 to 1999 and earned three Super Bowl rings, a Super MVP, two NFL MVPs, and an NFL Offensive Player of the Year award. A certificate of authenticity is provided by JSA. 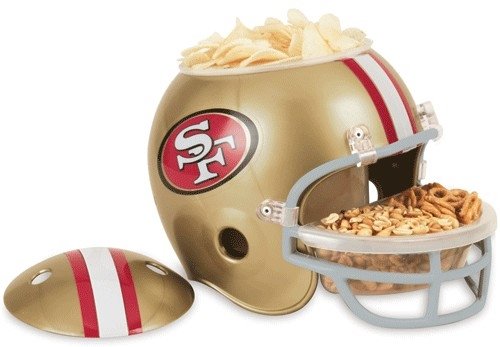 Serve your snacks in style with this San Francisco 49ers helmet. The snack bowl measures 9” tall and has a plastic compartment at the top of the helmet and removable divided dishes that fit right into the faceguard. It is perfect for chips and dip, to use as an ice bucket, or as a planter! 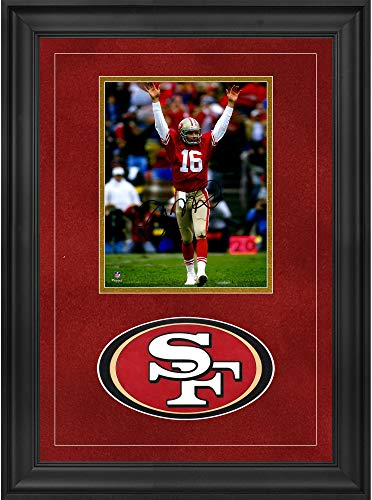 This 8″ x 10″ photo of Joe Montana was signed by the MVP quarterback. Framed in black wood, the collectible item also features the team’s colors and an engraved nameplate. A certificate of authenticity is provided by Fanatics Authentic.

The Niner gang has been around a long time celebrating their love for the red and gold. Now you can own your own memorabilia to show your 49er team spirit.